The Aim in Dogstar is simple. Stay alive, kill the enemy ships to release your comrades,  rescue your comrades, and escape the level before time runs out.  There are many ways to gain 1-UPs, bonuses, chain kills, insta-craft new powerups, and heaps more.  The main powerup in Dogstar is a smart weapon, that multiplies the rewards depending on the target destroyed.

Try to line up enemies and take out lines of them with a single powered up shot for huge bonuses. Two of the particularly relentless enemies: Otto, and The Miner, can only be destroyed while powered up, but then they are also turned into huge mass  destruction weapons.

To win a level: Rescue 15x Comrades in a level to open the Stargate.  Fly straight into the Stargate to end the level, or you can fly around being a badass and racking up points and powering up pulling off huge kills and classy combos and exit when you choose. But you must complete the objective within the timer and escape.

In this free demo version, players can try out the following levels from Dogstar, at two selectable skill levels - Regular, and Brutal.

Achievemements and Online High Scores are turned off in the Demo.

The soundtrack to Dogstar is by ROCCOW, the master of chiptunes and DJ from the Netherlands, who composes music using Gameboy. Each level has a unique chiptune.

The full retail version of Dogstar has the following features:

Compete against Dogstar players from the world over and post your best scores. Dogstar uses a secure OAuth2 back end, to ensure the only scores you should see online are legitimately earned.

Venus level: The final showdown - A unique vertical level where you Battle masses of Alien Hordes, 2x Boss Battles, Comet storms, and try to Destroy Venus, all before time runs out.

if you are good enough to defeat the final level Venus, you are jumped back to the  starting level Jupiter at Veteran settings,  all enemy AI is ramped up, and things will be much tougher. How long can you last, and how high will you get on the world leaderboards?

Venus level: The final showdown - take on all enemy types at once, and try to destroy the Enemy Home Base of Venus before time runs out!

if you are good enough to defeat the final level Venus, you are jumped back to the starting level Jupiter at Veteran settings,  all enemy AI is ramped up, and things will be much tougher.

In Deathmatch, choose the level you want to play from any of the planets, and the game is a head to head battle where you can win by either:

1/ Destroying your opponent the most amount of times within the time limit, or
2/ Rescue 15 Comrades and escape before your opponent

Greetings, Starfighter! And thanks for downloading the Dogstar Demo.

The zip file you are downloading also contains a manual for the full game. There is much under the surface in Dogstar, so it's worth having a quick read.

The full game is available on Steam - Steam achievements are part of the fun of Dogstar.  There is a full version planned for Itch that will include achievements via an alternate achievements system. 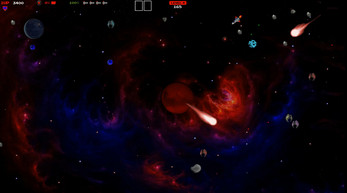 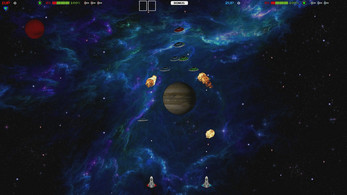 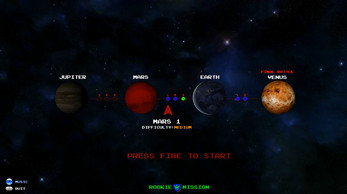 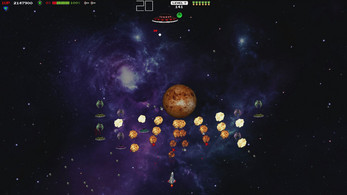 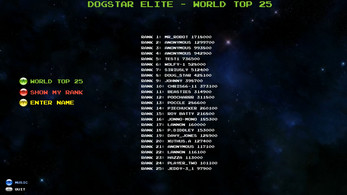